WWII is getting slightly tired in video games... my solution. (And no, it isn't final.) 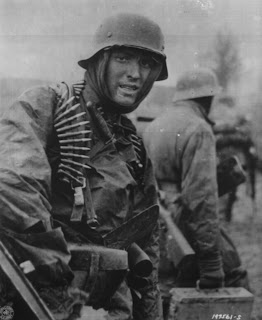 It has managed to capture my interest lately, regardless. I'm finally playing through Call of Duty 2, in my ongoing penchant for playing games about 2-3 years after they release. It was the same case for the original Call of Duty. I don't know what it is, but the expansions for both it and Medal of Honor: Allied Assault can be summed up in one word -- "Meh." They have slightly prettier graphics and some cool scenes here and there, but they somehow missed what made the base games great. Such as making me wade through 30 enemies with a Panzerschreck and a Thompson. Oh, and there's that tank I have to destroy which is being blocked by the aforementioned enemy. That's about when I pulled a Dane Cook and proudly declared:

"Fuck this game."
Next up is Medal of Honor: Airborne. It looks pretty hard on the later levels, even on CASUAL difficulty. About 3848304349 "Jerry" with rocket launchers. Oookay.

*****
Now I have to ask, is it that hard to make a WWII game from the Germans' point of view? Are we still so steeped in being "politically correct" that we can't see that they led lives, too, and didn't just run out into the open to be mowed down by like 15 Garands? You'll let us play multiplayer games as them... why is it so hard to have an engaging single player game where you play as part of the Wehrmacht? It's not like we're asking you to make a game in the POV of the S.S., for Christ's sake. It took about 70+ years to even make a movie based in the German soldiers' POV for the fucking FIRST world war. Come on, people. Get past the associations with the Nazis. You know as well as us that the whole WWII thing needs some freshness. This is it! This could be the boost we need.

Now, I have an assignment for you, Infinity Ward, 2010, and whoever makes the endless supply of those Brothers in Arms games: Watch the second episode of Band of Brothers... the same series you make so many references to in those games! Base a whole game around the segment where the alleged "Kraut" tells the US paratrooper that he's from his same state. Now, consider the fact that you're making so much money on your best selling games that it wouldn't be that much of a risk. Then, GET THOSE IMAGES OUT OF YOUR HEAD of the mean faced Fritz who wants to slice your head open with a spade. Look at all those great Call of Duty box arts. Do those guys look that way, or the chap pictured above? No. They look professional. Some, like the aforementioned chap here, even look a bit scared of that artillery off in the distance. Now, use that sort of imagery on a box art, and change the uniform to a German one. Not so hard, was it? See that look in his eyes? That's what the Germans felt, too. They had families back home. They were drafted. Now, find some German actors. Come on, you have the money. You've hired them enough to play "the enemy" in all the other games for the past five plus years. Good. Now, find a translator, add in subtitles, hire a good writer to weave a backstory for your main character and flesh out the ingame plots, coupled with some research and interviews with German veterans. Weave the same kind of gameplay we expect from you guys so far into this game. You have a hit. Not an instant hit, and maybe it doesn't quite make as much money, but you'll be slowly starting the next trend in WWII games. And no, it isn't aiming down the sight or playing as Russians (who were still technically Allies, however much Patton hated them).

Did I need to tell you guys this? I shouldn't have to. You should have found this out by now.
Email Post
Labels: rant video games