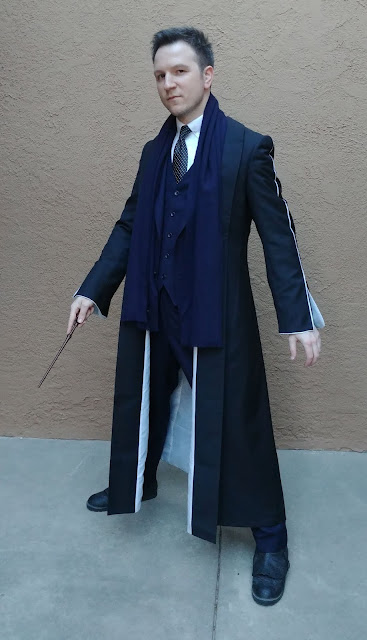 Some time ago, I struck up a conversation with Raj Bista of Baron Boutique. He is one of its founders and has been there for its entire 20-year history, being the main point of contact by answering emails himself. During our conversation, he asked if I would like to test one of their movie replicas after the prototype had been finalized. I was more than happy to, given it was based on a costume from one of my favourite movies of the last few years. Just in time, as the second movie has just released, Fantastic Beasts: The Crimes of Grindelwald.

Baron Boutique has seen some popularity in the nerd and cosplay community due to their replica costumes. I first came across them when looking up replicas of Neo's coat from The Matrix Reloaded back in 2004. My funds did not allow for such an expenditure back in high school, but I nonetheless bookmarked them. I later purchased a three-piece suit in my newly found menswear craze when I came into a bit more money in college. At the time it was only $209, a medium grey tropical wool number. This had mixed results, primarily due to me not knowing how to measure! However, the quality was generally pretty good and the fabric worked well enough for Florida's hot and humid climate.

Fast forward to over a decade later and I am reviewing the Percival Graves Black Coat for them. This is the robe-like overcoat worn by Colin Farrell's character in Fantastic Beasts and Where to Find Them. Colleen Atwood's costume designs were based on aspects of 1920s fashion, but with a wizard or witch twist. In this case, it also hinted at Graves' true identity as one of most dangerous wizards of all time. The full-length coat has an open shawl collar all the way down that subtly reveals the lining, connecting it visually to the sleeve lining and piping detail of the same fabric. The sleeves have a long vent without buttons and are flared at the end for a wizardly appearance. The Baron Boutique replica can be ordered in the default black with white colour scheme, but also several other colours of tropical wool and viscose lining if one prefers. I personally feel the lining looks closer to off-white in the actual film stills and promotional images, but Raj requested that I test out their default colours. The tropical wool may have been chosen for comfort, given the wearers of this coat could be walking around pop culture conventions all day rather than a movie set or outside in fall and winter. The movie costume appears to use a thicker fabric than this, more accurate to when suitings and overcoatings were generally heavier than they are now. Their heavy weight wool cashmere overcoating would be a perfect choice here for getting the right drape versus period accuracy. 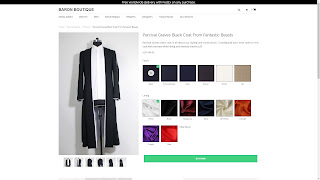 The other, most noticeable change here is that the original garment is lined with a corduroy-like ribbed fabric, whereas this replica has a satin viscose lining that will, again, be lighter and thinner at the sacrifice of accuracy. It would be nice to have accents of off-white corduroy where they are most visible (sleeve piping and opening, front panels, skirt below waist) as a compromise, in addition to the change of viscose lining colour I already suggested. The option of having the shell in heavier fabric could also be useful to those who want more screen accuracy or utility during the colder months. That said, the general shape and details are correct down to the body coat seams and buttoned, loose half-belt in back. 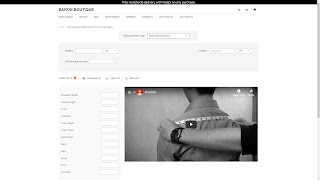 With the assistance of the YouTube videos provided on the website, my wife measured me. I was able to save it as a measurement profile for later use under any name desired, in case I order any other similar garments. One can, optionally, use pre-defined sizes. This is a nice feature, though it would be useful to get the sort of features for measurement profiles as seen on, say, Proper Cloth where one is able to clone and modify them for different uses. The fit I chose here was "Tailor Fit".

First, I was sent a cotton fitting garment to get a general feel of the final product and nail down any fit issues and preferences. It is very basic, with just polyester lining and almost no inner construction. This took two weeks from when the order was placed and one is able to keep the garment, I suspect because shipping it back overseas would cost more than it's worth. From there, one takes pictures from the front, back, and sides and notes any changes they want. They previously called this a "bespoke service", but recently have changed the wording and clarified that this is part of their regular service. I'm happy they made this change, because while this step certainly helps I would not call it bespoke by any means. It is still made-to-measure, just a little better than many online services in that realm.

The fitting garment I received fits like a trim suit jacket rather than an overcoat. I could not wear a jacket underneath, only a shirt and waistcoat. I therefore asked for a couple of changes. First, the sleeves lengthened a half inch. Second, that the fit be a little more full in order to fit over a suit if desired.

I received the final garment and it's quite nice, though could still use a bit of adjustment. Raj confirmed that the coat was widened by a couple inches in the chest and waist area. I think the sleeves, shoulders, and armholes could use some more room as well to fit better over a jacket or thick sweater. Upon trying on with a suit, the coat did fit over it but quite snugly. My suit jacket's collar tends to peek up and out of the back. I think adding a bit more height and stiffness to the coat's collar could help there. Broadening and structuring the shoulders more would help the resemblance too, as the original costume appears to have a more built up look. This helped Colin Farrell's already-impressive physique look even more imposing. I would also suggest ordering with "Relax Fit" for a more screen accurate look. If I were to nitpick any other aspect of the fit, it would be the sleeve pitch. Ideally it would be moved back a little bit since my arms tend to hang down a bit more than most people, creating the slight crinkling effect on the back of the sleeve as seen above.

There are other little considerations that could help out cosplayers. For one thing, there are no internal pockets. Having two of the usual inner breast type for a wallet and phone, plus a third one allowing easy access to wand props, would help a lot with keeping one's belongings on hand. they could even put a pocket near the small of one's back, similar to old body coats, to store convention guides or other paraphernalia. You may also notice a label peeking out the right side. I feel it should be moved back into the coat an inch or two so that it is not accidentally glimpsed along with any pockets that were added. Now, I could have requested the addition of internal pockets, as they've done this in the past for customers, but I wanted to get a sense of the product as designed by Baron Boutique. 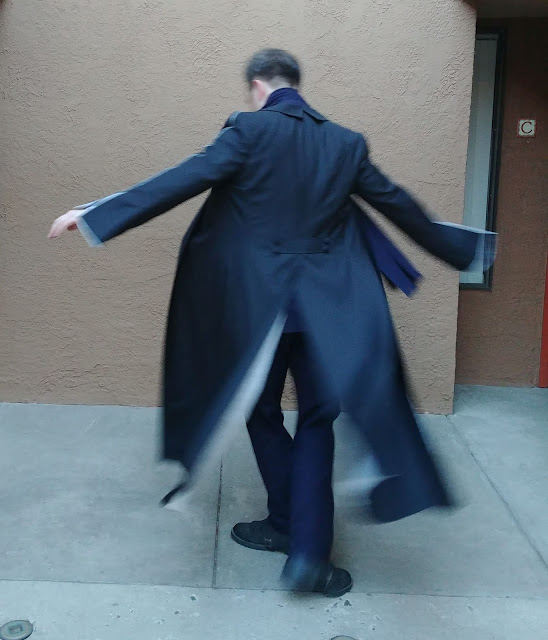 Overall though, this is a recognizable and accurate costume replica in its shape and cut. I sent some pictures of myself wearing it to friends who are "Potterheads" and they instantly recognized the character even though they were given no prior context! Loosening the fit overall and changing the fabrics to be more movie accurate would make it even better. I also hope they'll consider making his three-piece suit, which similarly has a few distinctive touches that set it apart from 1920s "No-Maj" clothing. Baron Boutique did a pretty good job here and look forward to seeing more of their future projects.

Nouveau Vintage received material compensation from Baron Boutique in exchange for a review. However, every effort has been made to keep an objective point of view. Big thanks to Raj Bista for providing this made-to-measure garment to evaluate. 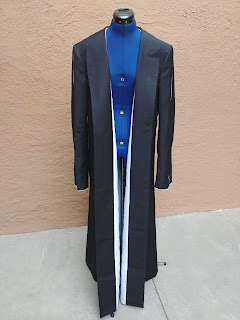 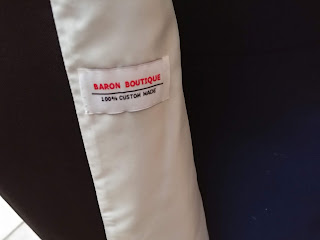 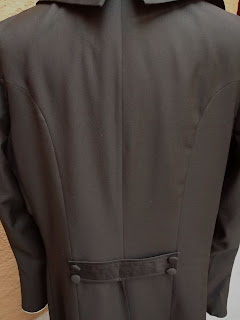 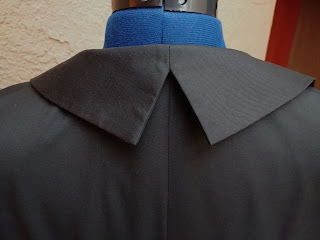 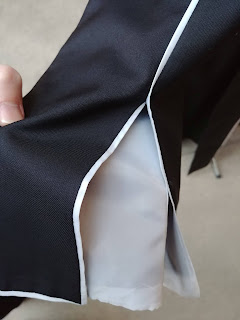 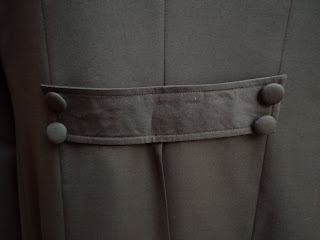