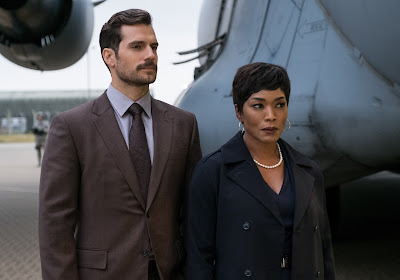 It's worth appreciating tailoring when it's done well for bodies outside of the mainstream. Large and/or muscular men are not fashionable at the moment and there are barely any "athletic fits" offered for ready-made suits in the 2010s. The best solution is made to measure or bespoke for these body types. In my experience, it's actually harder to fit for muscular bodies rather than portly ones. So I admired what was achieved for Henry Cavill in Mission: Impossible - Fallout. The clothing not only fit him, it worked for his character by not standing out too much.

Henry Cavill portrays a CIA operative, August Walker, opposite Ethan Hunt (Tom Cruise) of the IMF as both track down members of The Apostles, a splinter group of The Syndicate from the previous movie. Unfortunately for Hunt, Walker has managed to kill every single lead. One would not assume he is a trigger-happy gunman upon first glance. While imposing in height and build, Walker looks like just another stern, by-the-book government man. He even impatiently checks his watch while following the Director of the CIA, Erica Sloane (Angela Basset). He's not terribly stylish in what he wears. However, these deliberate wardrobe choices hint at his hidden identity.


After performing a HALO jump, mostly unconscious, he takes off the HALO gear and puts on the same clothing he wore before going into the plane. Miraculously, his suit and shirt as well as Hunt's are completely unwrinkled despite being packed up so small! Did they find a Jiffy Steamer where they changed, or is this just top-notch CIA/IMF fabric technology? Jokes aside, Walker looks somewhat out of place and stuffy next to all the other partygoers at a French rave, not only wearing a drab suit and tie but carrying a briefcase (which turns out to contain mission-critical equipment). Hunt, meanwhile, dresses more appropriately to blend in and pose as a criminal with an open collared white shirt and stylish single button blue suit. Other attendees may be wearing suits and ties, but appear to be having more fun with it than Walker is. He could have taken off his tie, but this is probably part of his misdirection into having Hunt believe he is nothing but a blunt instrument. Now, much has been made about how Cavill appears to grow a beard (and a breast pocket!) in a few frames of film when the trailer first released. In the film proper they are always there, just not as visible in the trailer due to the compression used for streaming media and the lighting. Additionally, the way Cavill "reloads" his fists -- pulling the shirt taut against his chest -- makes the breast pocket not as visible for those few frames. So, mystery solved.


The cool toned, medium brown suit -- which can also be described as charcoal brown -- has a button two front, double vents, and flat front trousers with belt loops. The fabric appears to be a worsted wool twill. Unlike some of the tailored clothing he wears on the red carpet, this suit fits Cavill in proportion to his build and does not fight against it, especially at his deltoids. It is perhaps even a bit loose by today's standards. This suit still looks like it belongs in 2018 due to the gorge height and button stance, but it's nothing particularly out of the ordinary when compared to the most conservative offerings from Brooks Brothers and Hart Schaffner Marx currently. In the updated American style, it has soft shoulders with minimal roping. The notch lapels, horizontal flap pockets, and straight breast pocket are what one would see on any other American business suit today. This is directly in contrast to Ethan Hunt, who seems to enjoy dressing nicely and spices up his suits by choosing peak lapels and slanted, jetted pockets. The sleeves are unfortunately too long for his shirt cuffs to show as is traditional. Soon after his jacket is whipped off to engage in fisticuffs with their target, it becomes unwearable due to covering up... well... a lot of bodily fluid.


With the suit, Walker wears a light grey, medium spread collar shirt with rounded barrel cuffs, the latter of which his cumbersome black watch does not fit into. The fabric looks to be end-on-end poplin, made up of medium grey and white yarns to give a more interesting appearance up close. The shirt has a breast pocket and, for today, a somewhat relaxed fit though it certainly does not look like a tent. It is likely off the rack with alterations or meant to look that way. The black and grey "static" print tie is knotted in a half-Windsor. Its classic width harmonizes with the moderate-sized jacket lapels and both work well on his build. The collar points could use a little more spread and length to meet the lapels and match Cavill's strong jaw, but it does help the shirt further look not-so-special. The colour of the shirt is not traditional, generally whites and pastels are the best choice for wearing with a tie as it helps direct the eye upward to the wearer's face. However, dark shirts are often worn with ties by villains in order to visually convey the morality they occupy. This grey shirt works in a similar way. It's noteworthy that Hunt wears a dark grey shirt in the opening of the film while posing as a black market dealer. Also noteworthy, but not obvious on first viewing, is that the decoy "John Lark" he fights in the bathroom of the rave in Paris is wearing a similarly coloured shirt and the same tie as Walker! Finishing off the look, he wears dark brown blucher cap toe shoes and a matching dark brown belt with a silver square buckle. Though he clearly isn't as interested in fashion as Hunt, at least he knows what colour shoes to pair with what colour suit.


He is later seen conferring with Director Sloane while in a dark tan sports coat, taupe chinos, and a medium brown fly fronted raincoat. With it he wears a light blue shirt in the same style as he wore previously and a dark grey tie with a small check pattern. This establishes August Walker's colour scheme, which is followed to the conclusion of the movie even as he's wearing more casual and functional clothing. Walker's earth toned wardrobe could be seen as a metaphor for the fact that he doesn't just operate in shades of grey, he goes outside of them in trying to radically destabilize the power dynamics of the world. Most government bureaucrats, as presented in movies, wear dark business colours such as charcoal and navy as their base. Both IMF Secretary Alan Hunley (Alec Baldwin) and Sloane are prime examples. By contrasting their wardrobes against his in such a striking way, they look like part of the system which Walker resents and has worked within to disrupt.


Screencaps taken by henry-cavill.net. Promotional images by Paramount -- used in this post under fair use for the purposes of education, comment and critique, consistent with 17 USC §107.
Email Post
Labels: clothing on film Henry Cavill Mission: Impossible suit tailored clothing