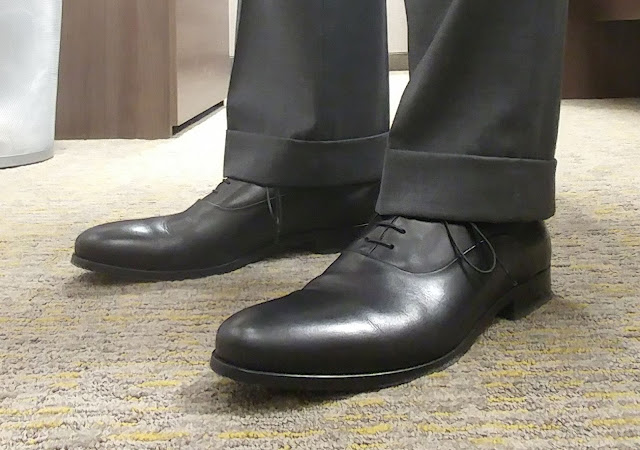 Some time ago I got in contact with Eddie, founder of Owen Edward. I was awed with the quality level for the price offered. Only $229! How did they achieve this? Partially because The Owen, a plain toe oxford, is the only style offered. After all, their slogan is "One Style - Zero Thinking". Only available in black. Sorry, brown shoe lovers. But it is a good foundation shoe for one's wardrobe, even if you only wear a suit, tie, and dress shoes for the odd wedding, funeral, and job interview. Black plain toes work well for all those occasions including black tie. After some discussion, Eddie kindly offered a pair to evaluate.

Much like the Beckett Simonon shoes I reviewed recently, they have a direct-to-consumer model that allows them to bypass all the retail markups such as advertising, sales commission, and distribution. They claim to use the same Italian factories and leather as brands that sell for $600. Blake-stitching is used rather than a Goodyear welt. I prefer the latter, but in the end understand why they made this choice. The Blake-stitch also allows them to make the shoes much sleeker than a Goodyear welt could be and for a bit less. There is much debate over the best method of attaching soles. I won't get into it here, save to say that the stitching on the footbeds of Blake-stitched shoes doesn't bother me in the least.

The shoes have a suede inner heel cap and notched corner on the inside heel to avoid catching on trouser turn-ups -- just like Beckett Simonon. While they are $30 more, I think the price is justified given the quality. That said... you get $30 off just by hovering around the website and putting in your email to the pop-up box that eventually appears. That makes it equivalent in price. The leather looks and feels higher quality, plus they are made in Italy rather than Columbia and Portugal. There's an overall seamless appearance front to back, including the heel not being divided in half, and there are no reinforcement stitches around the throat and eyelets. Arguably this is just down to aesthetic preferences, but it certainly is nice to look at and goes well with a minimalist look. It is for this reason that I would even wear them with a dinner suit. A spit shine would bring them up to that task even more.

Unlike Beckett Simonon, you're not getting any little extras like shoe bags or extra laces. These are such a good value that this is inconsequential though. Even though they value their product at $600, we're still talking about shoes in the $200 range here. If anyone is still griping: Spend the $30 you saved signing up for their email list on some flannel shoe bags, a spare pair of laces, and a caffè latte. There. Problem solved. 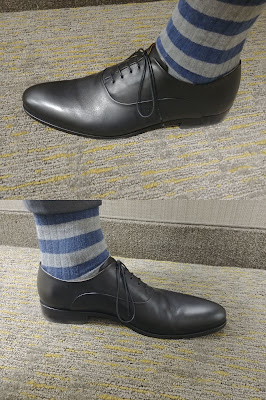 I was shipped a pair of 43.5 EU (European) -- equivalent in size to 10.5 US even though I usually wear 11 -- because they run about a half size large. They advise that dress shoes should feel tight in the width at first. At first I was worried they were too tight upon trying on, but within an hour they felt right as rain. Eddie knew what he was talking about. The fit is pretty good, though on my first wear I encountered a decent amount of irritation at my heels. Tightening the laces some more helped. The issue was probably due to heel slippage

Overall, I give Owen Edward pretty high marks. Since they have free shipping and returns, you have nothing to lose by giving them a shot. They are a fantastic value whether you're starting a collection of dress shoes or want to add a versatile black pair. I would ask for them to introduce more styles and colours but that would defeat the whole purpose of the company, wouldn't it? These are beautiful, sleek dress shoes with an attractive profile that will work for a variety of occasions.

The Owen is pictured here with serge trousers from Zanetti and socks from Gap.

Nouveau Vintage received material compensation in exchange for a review. However, every effort has been made to keep an objective point of view. Thanks to Eddie for providing a pair of The Owen to evaluate. 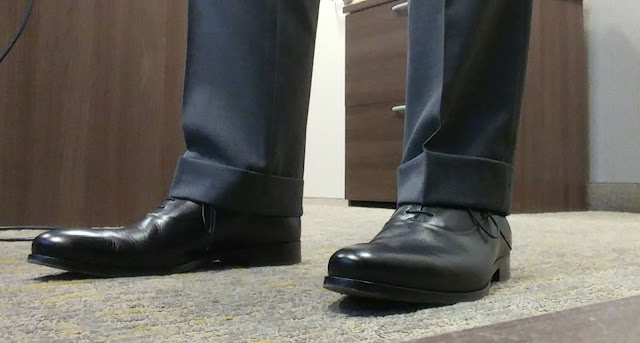 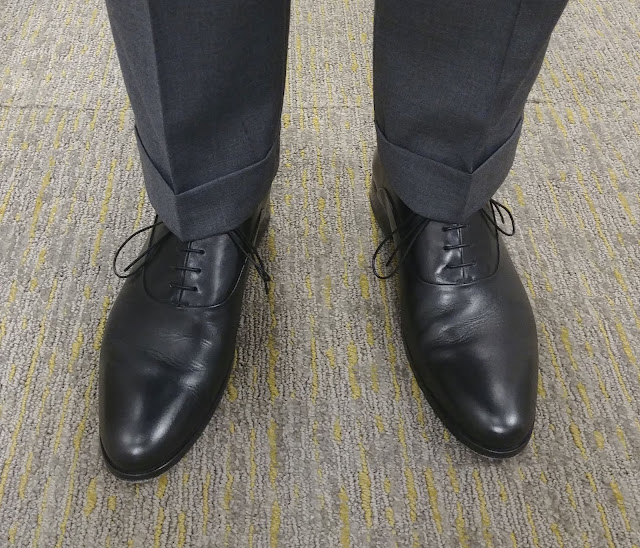