I reviewed The Tie Thing a while back, a device I still use a lot of the time when wearing a tie and sport coat or suit. It solves the issues, functionally and aesthetically, some menswear aficionados have with tie jewelry. There are other competing products out there of course which do the same thing. It's even offered as an extra if you order a shirt from Tailor Store. 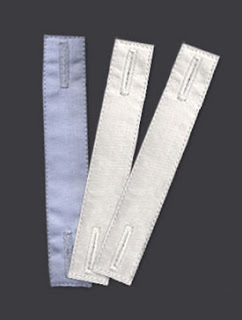 Sometimes though, I just want to wear a tie bar or tie clip as it's sometimes known. It looks neat, adds some visual interest, and holds the tie securely in place. Side benefit for those who care: The tie bar is pretty popular right now, perhaps due in part to television shows like Mad Men and White Collar. 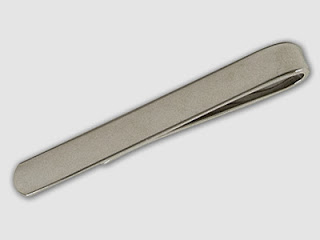 The only downside is that they can hold just a little too securely for some tastes and thus take some fiddling with to get in the right position. While the tie tack can also look nice, I don't really like the idea of piercing something through delicate silk. Tie chains are simply too flashy for me, especially as they are often gold and made with figaro style links. Contrary to what a few say, even a tie bar with a spring hinge closure will not damage your tie since the part touching it is smooth. I prefer the slide type which used to be available only from a few expensive manufacturers, but now is more readily obtained at affordable price points. The Tie Bar, Kent Wang, and J. Crew all make simple and attractive ones for $75 or less.

I recommend you wear them about midway down your shirt. Higher up and you risk looking affected not to mention negate the functionality of keeping it from harm's way. Also, be sure to arch your tie knot if you're not already doing so before attaching the bar. Seriously, don't worry if it only peeks out from your lapels a bit. It's preferable to wearing it so high up.

Some claim you should match it to other metals you are wearing -- watch, belt buckle, cufflinks, etc. I've mixed silver and gold tone metals before and don't see how it detracts from the overall presentation. By that same logic, should we also match it to our blazer buttons, which are often gold toned? That's just too precious for my taste and would perhaps look a little on the gaudy side. When in doubt, silver is always tasteful. But I'll admit to some bias here. Aside from blazers, surcingle belts, and black/white tie jewelry, I mostly prefer silver adornments.

More hotly debated is with which outfits they are appropriate. As a personal rule, I try to not combine them with a three piece suit (which makes it obsolete anyway) or double cuffs. At that level of formality, the tie bar seems a little out of its league. There are others who only think it appropriate with a sport coat. What do you think?